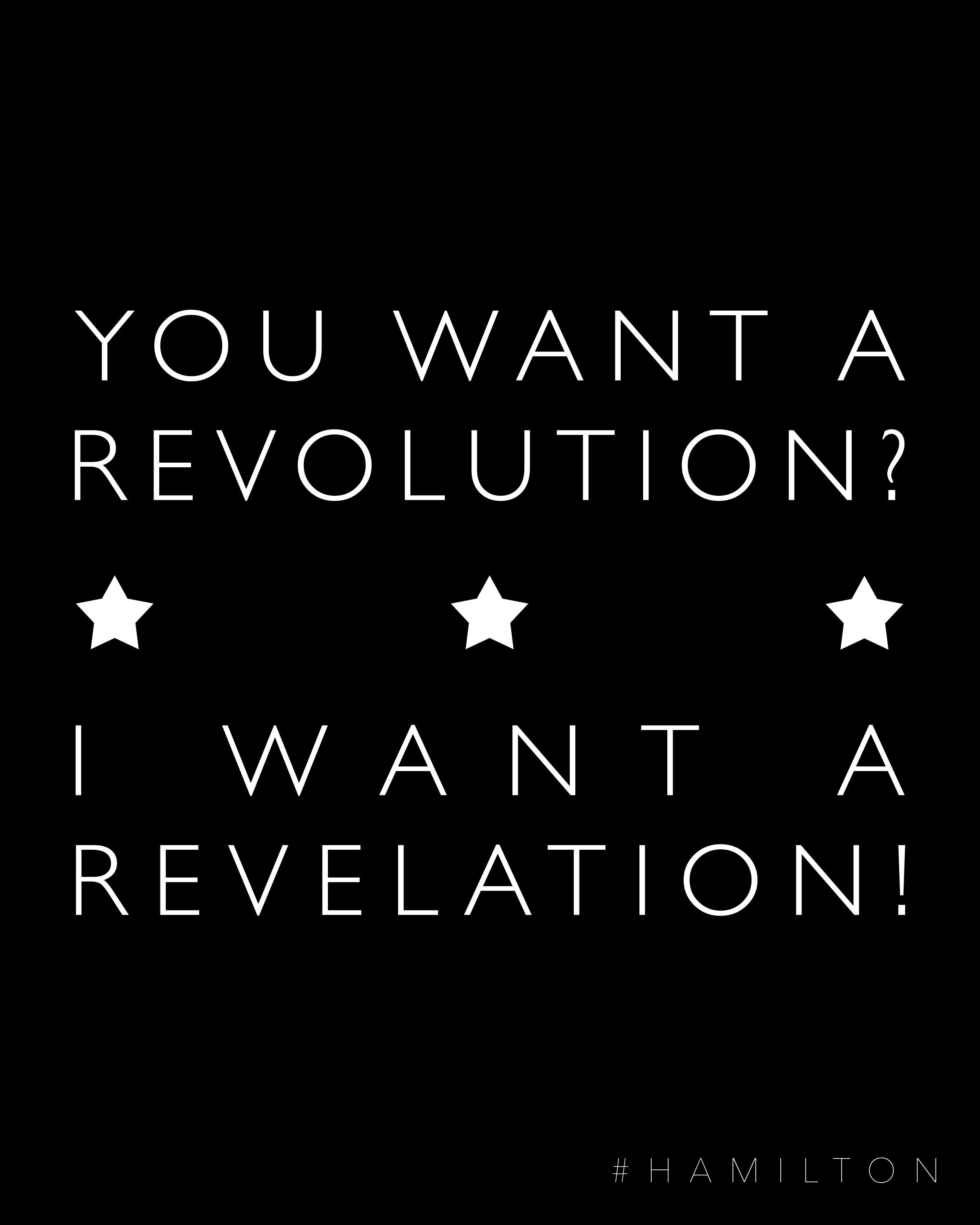 As I debated starting a blog about my struggles with learning the difference between living and surviving and whatever else that I may feel called to discuss; one phrase kept playing in my head. (True many lyrics pop into my head at any given time and Hamilton has amazing bars to jam along to). "You want a revolution? I want a revelation!" Revolution and Revelation. I started writing this blog because of these two words; because of this phrase and the power behind it.


"New ideas in the air" - "The Schuyler Sisters" Hamilton

Everywhere you look in the past few years you see people talking about a need for revolutionary ideas and what can be seen as revolutionary acts occurring over and over again. From the #TimesUp movement to #MarchForOurLives to countless others, people have been exercising their rights as Americans as stated in the Constitution. Revolutions and revolutionary ideas have their place and maybe are very much needed right now. I agree with many of those ideas but I keep being struck by the second part of this lyric. To me REVELATIONS carry more weight and last longer. For revolutionary ideas to prosper, spread, and create change, the people living with this conflict new and old ideas have to go through personal revelations about their own lives and values. And those kind of revelations are hard, scary, and often times postponed part of any revolution.

In Hamilton, Angelica Schuyler is right in discussing how when the Founding Fathers discuss independence for all men but forgot about independence for women. (Nor do they mention the independence of the entire population of people they treat as property) Angelica Schuyler is right; our Founding Fathers understood revolution but did not want to undergo the revelations that would become necessary for the United States to grow and prosper into the country it is today. For me the power and vulnerability of revelations brought me here: a public forum.


"Some men say that I'm intense or I'm insane; You want a revolution? I want a revelation! So listen to my declaration:" - "The Schuyler Sisters" Hamilton

Revelations incite me and terrify me all in the same moment. I write this blog to start a discussion about all things of life: good and bad, happy and sad, sunshiny or gloomy. We all seemed shocked and appalled when these gloomy moments are forced into the light of day by tragic moments. And we should be. But what incites me to ramble and write is I want a REVELATION in how we all see the one world. Or one person sees the world. Or how I see the world. A REVELATION that lasts longer as we accept that there are gloomy days to go with the sunny ones. And there is nothing wrong in admitting that. I want a REVELATION in each of us that owns the facts that life can be hard sometimes forcing many of us through battles to get back into the light. Sometimes those battles are daily or sometimes further apart. But having to go through those battles does not make me or anyone less than, different, or defective; there's your REVELATION. I have great days of sunshine and rainbows, nothing special days, and hard days when I feel like I have my own personal rain cloud. But the day I began accepting that all of that was normal, was what life is all about; I had my own REVOLUTION that only occurred after a long series of REVELATIONS. And that's what I hope this blog helps create, a REVELATION that life is about loving, learning, growing, and evolving through all of life's events. Maybe if we all started facing our own personal REVELATIONS, these REVOLUTIONARY ideas would become more permanent ideas. Maybe we would all give each other a little more slack and support as we each face our own battles separately and together as a nation.


"I'm looking for a mind at work." - "The Schuyler Sisters" Hamilton

And yet the REVELATIONS I yearn for can also terrify me occasionally into panic. Writing this blog scares me: Am I rambling? Is anyone listening? Does anyone care? And if they do what are they going to think about me? Maybe I should have also included that REVELATIONS often occur in large and small ways day in and day out.

Revelations and Revolutions are rather large ideas that also occur frequently in our daily lives. So is that the greater idea behind this lyric or this song that wouldn't leave me alone. That revolution or revelation; we're all being called to think, explore, and create positive change in ourselves, in our daily lives, in each other, and in the world at large.